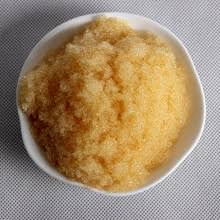 Ion exchangers are resins that are polymers with cross-linking connections. The resin has active groups in the form of electrically charged sites. At these sites, ions of opposite charge are attracted but may be replaced by other ions depending on their relative concentrations and affinities for the sites.

The active sites are one of a few types of functional groups that can exchange ions with either plus or minus charge. Frequently, the resins are cast in the form of porous beads.

The size of the particles also plays a role in the utility of the resin. Smaller particles usually are more effective because of increased surface area but cause large head losses that drive up pump equipment and energy costs...

Regeneration of the resin is also a feature of ion exchange. The resin is flushed free of the newly-exchanged ions and contacted with a solution of the ions to replace them. Regeneration is initiated after most of the active sites have been used and the ion exchange is no longer effective. With regeneration, the same resin beads can be used over and over again, and the ions that we are looking to get out of the system can be concentrated in the backwash effluent, which is just a term for the spent fluid used to regenerate the ion exchanger.