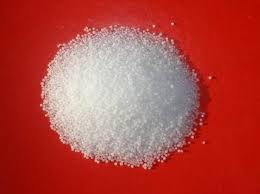 Sodium percarbonate formula 2Na2CO3 · 3H2O2 is a colourless, crystalline, hygroscopic and water-soluble granulated solid. Sodium percarbonate is great for cleaning and disinfecting. It is used in some eco-friendly cleaning products and as a laboratory source of anhydrous hydrogen peroxide. As an oxidizing agent, sodium percarbonate is an ingredient in a number of home and laundry cleaning products, including non-chlorine bleach products. When dissolved in water, it yields a mixture of sodium carbonate and hydrogen peroxide which eventually decomposes to water and oxygen.